As part of its campaign to organise casual and temporary workers, members of Perth IWW took to the streets on Saturday afternoon. Up to 10 hostels were leafleted across the city centre highlighting working conditions and arguing the need to fight for your rights, because individually we are powerless but collectively we are an unstoppable force.

Please do not hesitate to get in touch with us with any questions.
Posted by Catta at Wednesday, February 06, 2013

Help Others Find Us

In order to enable more backpackers and temp workers find us, we have made a leaflet to spread around backpackers, share houses and hostels in Perth. If the place you live appears to have no such leaflet, please help us print out, write up or any kind of way to spread the information.

The following URL are the file for the leaflet, in Chinese and English. We're also looking for people to help us translate the leaflet. Please feel free to contact us if you can help.

Email ThisBlogThis!Share to TwitterShare to FacebookShare to Pinterest
Labels: leaflet 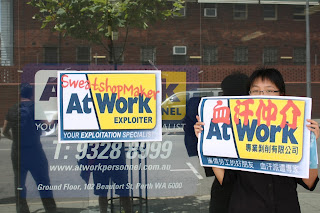 Last Friday up to half dozen people attended successful information picket organised by the Tempworkers Australia & International outside the headquarters of AtWork in Perth city to highlight the plight of young Taiwanese guest worker Catta who was dismissed after enquiring about her workplace rights and the fact that she and her fellow colleagues were being underpaid by the agency.

The Perth Western Australia Labour Hire company mainly focuses on the recruitment of workers from Asia and the Far East and according to its own website offers bosses the opportunity "to lower labour costs" so that bosses could "say goodbye to staff management issues forever".

In a leaflet delivered to inside the company's offices and outside Catta stated: “I'm a student in Taiwan that I suspended my study and came to Australia for Working Holiday. As far as I know, Australia is a great country with human rights and people are friendly. However, I had encountered unfair treatment on my work.